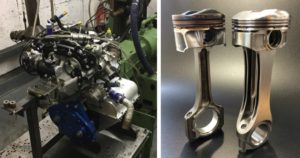 In light of future fleet CAFÉ standards, this manufacturer has placed strategic importance on finding and incorporating technologies that can be used in their current engine architectures.  This program targeted an SUV engine that the manufacturer has prioritized for future growth.

The goals for this fitment project are to understand the potential performance against the standard drive-cycle and determine cost estimates for manufacturing based on developed CAD models.

In light of new regulations being imposed on both on- and off-road heavy-diesel equipment as well as constant demand from customers to reduce their total cost of ownership through fuel savings, this major heavy-diesel OEM engaged YAN Engines to integrate the D-Cycle into their existing production engines.

The goals of the program were to determine performance output and design a minimally invasive conversion of one of the OEMs best-selling existing engines for production.

The program designed differential piston strokes to be optimized for the drive cycle of the typical customer of this OEM and included looking at both a single cam and cam-switching technologies to use with the D-Cycle mechanism.

In the second pilot, the client did the same work but in their own development and testing environment, achieving the similar results.

YAN Engines recently completed a D-Cycle™ modification of the Ford Ecoboost 1.0L engine. The Ecoboost is one of the most fuel-efficient production engines in the world, awarded the  International Engine of the Year “Best Engine Under 1.0L” award for six consecutive years.

When modified with D-Cycle™ pistons, the Ecoboost achieved 20% more fuel efficiency and exceeded the stock torque and power output.

When retrofitted with D-Cycle™ technology, the engine started and held idle over 40 times and is expected to have increased brake thermal efficiency of 20% across the drive cycle.