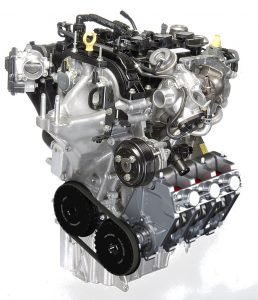 YAN Engines announced today that it has finalized and frozen its design for a prototype in the passenger vehicle segment. The D-Cycle retrofit of a Ford EcoBoost 1.0L engine marks the first of its kind for a modern, mass produced engine. The Ford EcoBoost 1.0L is one of the most advanced, fuel efficient engines in the world. Since its launch in 2012, it has won International Engine of the Year every year.

“We challenged ourselves to improve upon the best and expect gains that can’t go unnoticed,” said Lu Yan, CEO and co-founder of YAN Engines. “Our collaboration with Ricardo shows we should achieve close to an additional 20% fuel efficiency from our retrofit with the potential to reach 30% if we implemented some of our next generation technologies like our continuously variable electronic D-Cycle.”

This development work has resulted in two additional patent filings and new execution of a mechanism that adds robustness, ease of manufacturing, and the capability to integrate future D-Cycle generations.